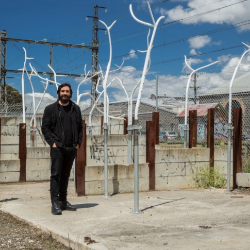 Ben Taranto is an interdisciplinary artist with a sculpture and installation based practice. His practice shifts between art and earth sciences, while balancing the physical with the transcendental. His work considers the human condition in relation to built, natural and virtual environments.

Physical materials such as glass, concrete and steel, often combined with non-physical elements such as the moving image, space, light and sound are used to explore how our senses assist us to perceive, relate and respond to various built and natural environments.

Taranto recognises his art practice as existing within the Anthropocene or Human Era. The unofficially named present era in which we modern humans now live, control and impact on major events such as climate, the alteration and movement of large amounts of earth, and the reduction of biodiversity from oceans, seas and rivers globally.