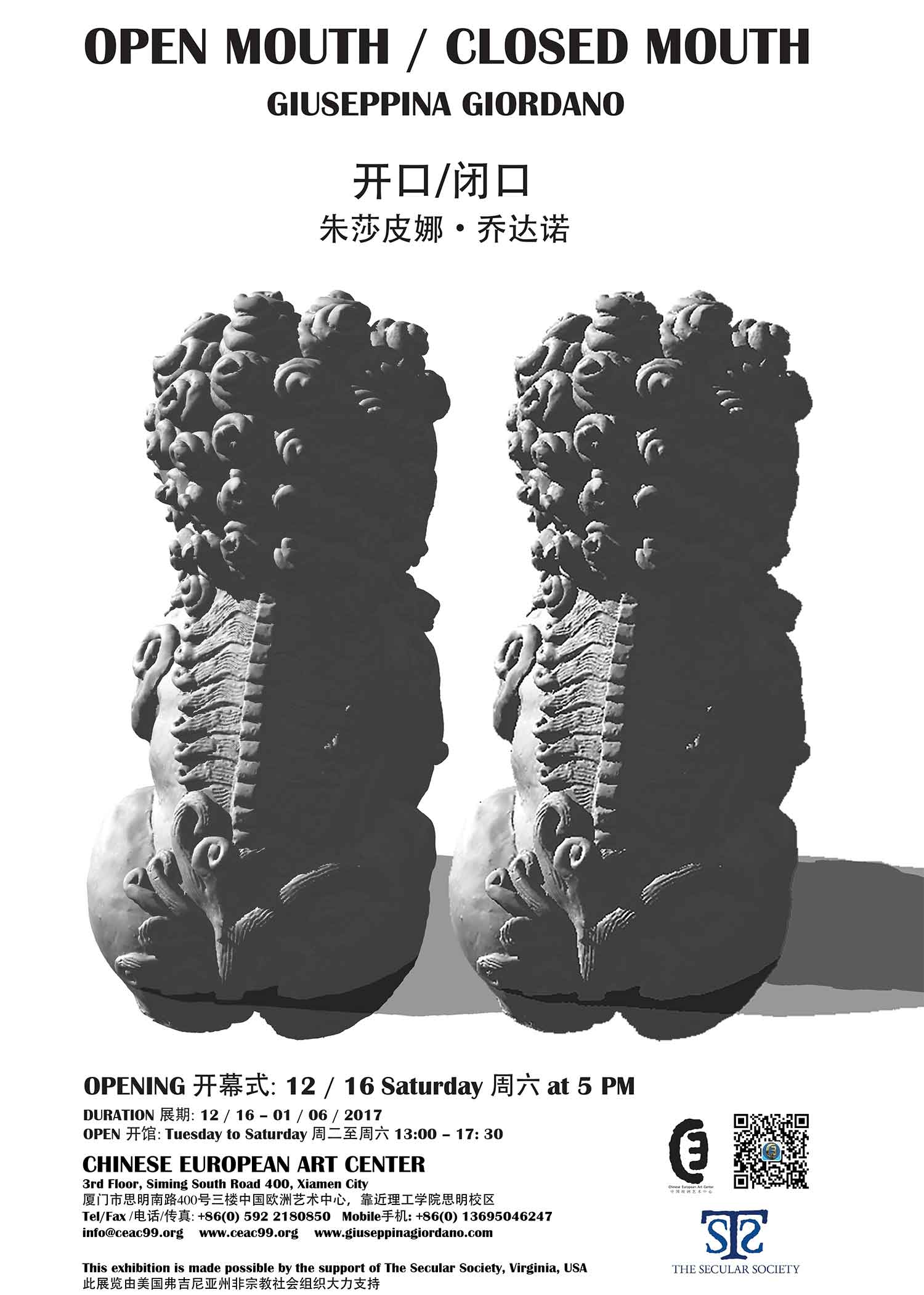 The Chinese European Art Center presents the first solo show of Giuseppina Giordano, a young Italian artist, which in the three months of residence in Xiamen has realized three new works that reflect upon the concept of a “non identical double”, where the double is not the duplication of the same, but the meeting with the other, and that have as a common field of inspiration the “complementary” principle. In Giuseppina Giordano’s new works the symbols and meanings of both Western and Eastern cultures finds a new structure, a new broad and auspicious perspective.

“OPEN MOUTH/ CLOSED MOUTH” is the title of the exhibition, but it is also the first work we find when entering the exhibition space. These couples of giant black silk made inflatables are a hybrid mix of Chinese stone lions, the guardians of the temple. They almost close the access, becoming a fragile physical impediment to the exhibition. The position of their mouth, open and closed, is linked to a variety of meanings throughout Asia: in China, the temple’s guardians are a female and a male, in Japan the open and closed mouth of “Komainu” refers to life and death, exhale and inhale. In any case, they always represent a couple of opposite.

“Double gaze” is a photographic diptych printed life size of two women. In each picture a woman knots or loosens an umbilical cord depending on whether we read from right to left or from left to right. Eve from Lucas Cranach, which was the inspirational framework for this work, becomes here a point of oscillation, something defined but not fixed in its meaning, entangling with the Chinese counterpart.

“HARD WAVES (Kuanyin and Virgin Mary staring at the sea) ” simply mixes the sea waves with those of the clothes. The statues of Kuanyin and of the Virgin Mary, that history has given us, are seen from behind and placed in such a way as to make visible the movement of their drapery: sinuous in one, straight in the other, in relation to video projection of the soft breaking of the sea waves on the beach. Kuan yin and Virgin Mary, both embodying love and compassion of a “mother par excellence”, are considered at a first glance a meeting point between Buddhists and Christians.