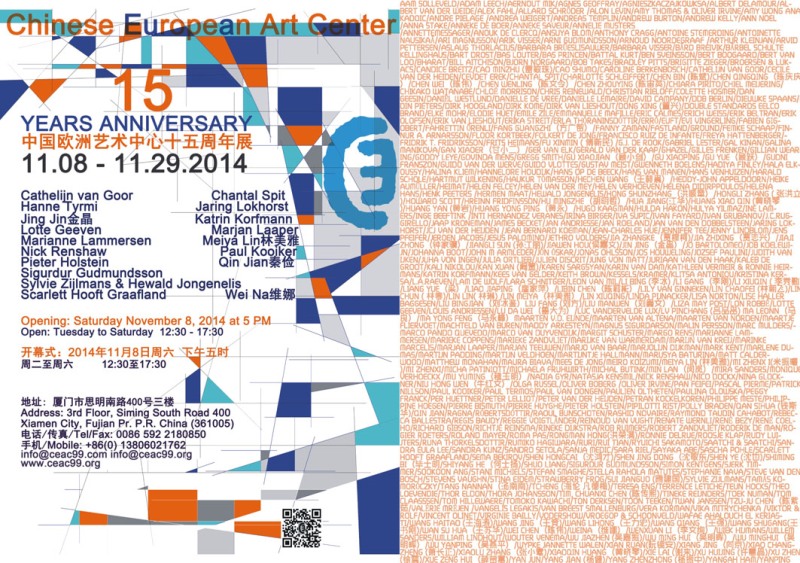 The Chinese European Art Center (CEAC) is delighted to present this group exhibition on the occasion of CEAC 15 Years Anniversary. Started from 1999 the CEAC plays a central role in southeast China’s cultural landscape. In the past 15 years CEAC has hosted and premiered international artists from all over the world. CEAC’s network is constantly expanding. Hundreds of artists from all over the world have worked at CEAC in the past 15 years. This stimulates action and communication between people from a local to an international level.

This exhibition presents 19 artists who have been worked at CEAC Artist-in-Residence program or connected with CEAC.

Cathelijn van Goor, Born 1976, the Netherlands. Lives and works in Amsterdam. Cathlijn van Goor is an Amsterdam-based artist. In her work she questions whether technological development really achieves progress. The idea of people losing control over their own inventions is a starting point for her recent series of graphite drawings. “Glitches” and “Clouds of paint and walls of paper” are based on destroyed images that were created accidentally by digital devices.

Chantal Spit, Born 1971, the Netherlands. Lives and works in Amsterdam.
About her work Chantal says: “All the fascinating things I see, feel and experience I try to turn into something tangible. My paintings are evidence of my existence.”

Hanne Tyrmi is a Norwegian artist who is unafraid of using a variety of visual languages to achieve her goals. She is a visual polyglot who has a reputation for making sculptures, installations, videos and photographic works that invade the emotions like a benign virus. Her work is infectious and contact with it sets in motion a metamorphosis that brings about a healthy resistance to the emotional malaise of our time.

Jaring Lokhorst, Born 1972, The Netherlands. Lives and works in Amsterdam.
Jaring Lokhorst perfers to paint motifs which may not be immediately recognized as beautiful by the audience. These are scenes he encounters in his own city and during his travels. These motifs are often about changes that cause patterns- casual patterns that you would encounter in nature instead of the rigidity of the city. These patterns are further manipulated by Lokhorst when he paints them on aluminum.

Jing Jin, Born 1984, Hubei China. Lives and works in Xiamen, China
Jing Jin’s practice focuses on the psychological suggestions that fluctuate inside and behind external and physical appearances. Representing the visual and textual tentacles of her own brain constructs and her self-acclaimed logic of contrasts, Jin’s videos, photography, objects and texts cover a wide range of different and sometimes complementary ideas.

Katrin Korfmann, Born 1971, Berlin Germany. Lives and works in Amsterdam.
In Korfmann´s recent work, the technical and visual conventions she puts into play obey to both a visual and conceptual principle. She does so by questioning the documentary and narrative aspect of photography and its reputation as a “witness to the truth”. Using a bird´s-eye view, she places the event´s ephemerality at center stage and creates a suggestion of distance for the spectator.

Lotte Geeven, Born 1980, the Netherlands. Lives and works in Amsterdam.
Lotte Geeven is a multi-media artist from Amsterdam creating tailor-made portraits of sovereign places. These simple yet graphic renderings aim to envelope the magic of autonomy and explore complex matters, including the idea of a power beyond our control that is related to a specific place.
Marjan Laaper, Born 1971, the Netherlands. Lives and works in Rotterdam.
Simple everyday phenomena are being presented within a quite poetic, sometimes even philosophical framework. General human experiences, human thinking, human nature and the experience of everyday life are starting points in her work. Often there is a tension between contradictory subjects and symbols like beauty and danger, the immaterial or transitory trust and alarm. The work does not give clear answers, but shows recognizable elements that generate questions.

Marianne Lammersen, Born 1984, the Netherlands. Lives and works in Haarlem. Marianne Lammersen is intrigued by the tension between the technological and the maintenance and preservation of human identity.
In her collages she searches for a balance, not only context, but also in her way of using materials. She uses insides and outsides, backsides to front sides, positive shapes and leftovers of paper cuts as important elements. In the work itself she tries to find a certain balance back, in content, in material, in shape.

Meiya Lin, Born 1979, Xiamen China. Lives and works in Amsterdam.
The work Rolling Marbles symbolizes the endless extension of one’s imagination, while presenting the development of imagination as a quality that very often lies in memories and feelings. As shown with the challenging ballet movements presented in Model Plays of the Cultural Revolution, space reflects personal memories. The marketable fragments of everyday life are reconstructed as symbols that have specific meanings. Complicated and dramatic emotional collisions are all laid out in front of the eyes. This world that is created of adult experiences and values starts to show a completely different side under a child-like kaleidoscopic view.

Nick Renshaw (PhD), Born 1967, Lives and works in Amsterdam and Xiamen, China. Nick Renshaw makes sculptures, commonly of a figurative nature, which carry a varied combination of influences. Influences which are equally of both a personal and wider cultural nature. Personal in that they draw from the multitude of significant moments and histories of importance to the artist himself. Cultural in that they convey what he considers to be appropriate subjects for an adequate portrayal and understanding of contemporary society. Echoing the wide and eclectic nature of his own experiences these influences are of a suitably diverse, often contrasting nature. Characteristics which subsequently determine the form, content and processes involved in visualizing each work.

Paul Kooiker, Born 1964, Amsterdam, The Netherlands. Lives and works in Amsterdam. In his work Paul Kooiker explores various aspects of the theme “looking”, such as voyeurism, shame and distance. His work can be seen as a continuation of an old tradition of focusing on the relationship between the artist and the model, the observer and the observed. Kooiker’s obsessive collections of images confuse, humiliate and unnerve. They raise questions about a photographer’s reason for looking at things and the motivation behind photographing something. Kooiker plays a game with the audience, by confronting the viewer with his or her own gaze.

Pieter Holstein, Born1934, The Netherlands. Lives and works in Amsterdam and France. Pieter Holstein is best known for the graphic works he made in the seventies and eighties. His work is poetic and at the same time philosophical and its influence has spread from Dutch to Icelandic artists. His work has been shown world-wide.

Qin Jian, Born 1957, Xuzhou, China. Lives and works in Xiamen.
About his paintings he says: “The elements that I often use for making my paintings come from pictures I collect from the internet. They are for me a kind of document that invites me to get the stories behind them. Some of those stories challenge me to turn them into paintings, which I then do.”

Sigurdur Gudmundsson, Born 1942, Iceland. Lives and works in Xiamen, China. Sigurdur has been living for the most part of his life outside of Iceland and he has spent the last 17 years in Xiamen, China. He is best known for his photographic works which have always been about philosophic poetry. Throughout the years he has also been making sculptures and writing novels and poetry.

Sylvie Zijlmans, Born 1964, the Netherlands. Lives and works in Amsterdam.
Hewald Jongenelis, Lives and works in Amsterdam. Her meticulously staged photographs are based on incidents that bring disruption to many people’s lives. These events occur on a global scale, and as an individual one can barely relate to them, but they nonetheless have a relentless and lasting impact on one’s life. These dramas of devastation and destruction relate to today’s political and economic crisis, but are reduced to a human scale. The scenes in Zijlman’s photos all seem to present us with something on the brink of transition, a scene on the cusp of something new. The video shows in this exhibition The idea of freedom is made together with Hewald Jongenelis.

Scarlett Hooft Graafland, Born 1973, The Netherlands. Lives and works in Amsterdam. Over the last ten years the Dutch artist Scarlett Hooft Graafland has traveled extensively to remote places all over the world to create her temporary sculptures. During these trips she heavily depends on the goodwill of the local community to help her with her interventions in the landscape. The landscape seems almost to dictate the intervention or performance, where the context of the specific place is an important part of the work. In these site-specific installations, Hooft Graafland would make use of local materials, traditions or techniques. Her sculptures often have a surrealistic character while the visual imagery and use of colours are straightforward. Thanks to this simplicity the work is never in a state of conflict.

Wei Na, Born 1981, Inner Mongolia, China. Lives and works in Xiamen, China. Wei Na works in the video medium, which she oftens presents as video-installations. In her work she is occupied with researching people in their daily life and thereby focusing on the psychological aspects of her subjects. The result is always a conflict between the conventional attitudes and judgments of society and of the person in question.