I AM A MOUNTAIN 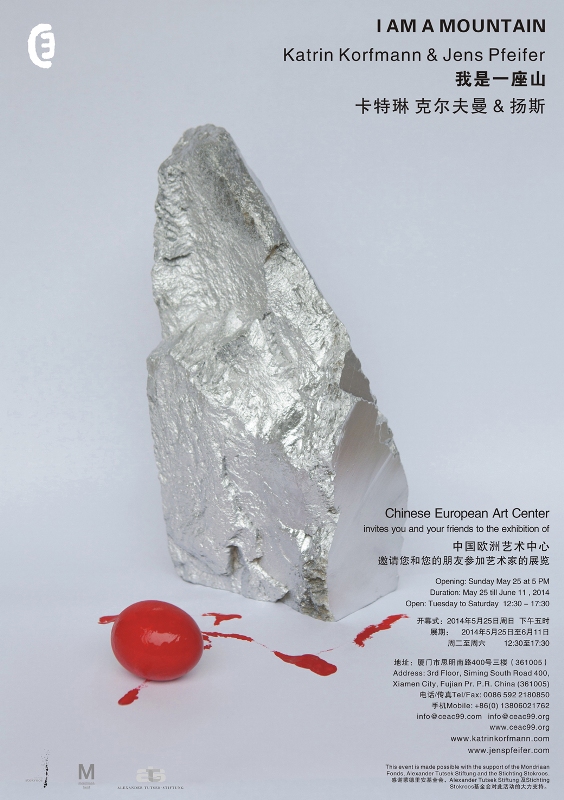 In different ways and with diverse media, the Dutch/German artists Katrin Korfmann and Jens Pfeifer investigate cultural identities and juxtapose unfamiliar and common ideologies. The result of their three-month residency at the Chinese European Art Centre is a surprising manifest of how entrenched we are in our own culture, even though we are living and creating art in a globalized world where we can easily set up a temporary studio on the other side of the earth.

In Korfmann’s new body of works she allows for realism, documenting human behavior that leads to a uniform result. In various places collective rituals are photographed: rituals sustained by individual euphoria in which colour – or colourful garment – dissolves all individuality. This uniformity consists of freely deployed ‘closed ranks’ and shows a euphoric play. The work presents a painterly, varied flurry of colours but on closer inspection, it reveals a physical, material essence of individuals who blend together into one large organism through their common actions.

“Wen ji qi wu” is the title of the large-scale photograph (270 x 385 cm) shown in the exhibition. During her residency at CEAC Korfmann devised, designed and carried out a ‘fake’ ritual that took place during Easter: Korfmann created special costumes and a choreography together with the dance students of Xiamen University and their teacher, Professor Li. The picture is a result of her made up ritual merging the European tradition of collecting hard-boiled colored eggs during Easter celebration with a Chinese traditional dance.

Jens Pfeifer’s work evolves out of his personal context and appears in various materials to enrich and emphasize his narrative. In search for objects which represent a personal though still Chinese identity, Pfeifer found once again that we most strongly connect our cultural identity to typical phenomena of local or regional expressions of nature.

At CEAC, Pfeifer exhibits two installations that deal with this manifestation of ‘nature in culture’. The first one, called “Elevated Nation“is a stack of glass tubes in the shape of bamboo, which reaches for the ceiling but is bound to collapse when carried out to its end. The second is a series of hammered stainless steel objects. These depict some of China’s holy mountains but are titled after Pfeifer’s own personal saints. “I-Shan”, “J-Shan”, “K-Shan” (to be continued).

At first glance the material holds no association with the context. Pfeifer offers with this contradiction a different perception. What we see is not what we get as the work has it’s own rules.