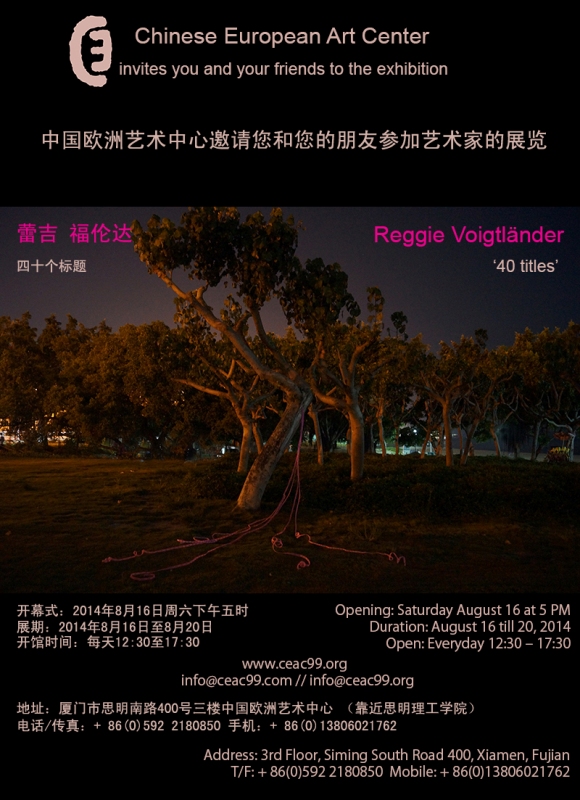 Reggie Voigtländer is a Dutch/German (audio) visual artist, working with photography, also resulting in installations and environments. She often uses day to day life as inspiration and utilizes ‘found objects or moments’. With her work she questions general assumptions and investigates universal aspects in relation to human existence. During her artist in residence with the Chinese European Art Center here in Xiamen, several new works came into existence, like (digital) videos, public interventions and photographic works. Inspired by several cultural aspects, she integrated that into some works that will be presented during the exhibition ’40 titles’.

But the exhibition also includes a work that marks the start of this artistic adventure: the video ‘Made in China’ she produced in 2012 in the Netherlands. It is since then part of CEAC’s video program. And exists of digitally modified photographs of the Great Wall of China, mostly taken by tourists and placed on the internet. Voigtländer arranged them in a sequence, suggesting a linear narrative within a seemingly cohesive whole, although each photograph was taken on a different spot, by different persons, on different moments. Bringing the images back here, she calls ‘Returning landscape’.

The title of the exhibition refers to her 40 artist books, also created during her stay here. Each book has a different title, for they were given by 40 different persons. Most of them she met wandering about during her stay in Xiamen. The concept is related to the working process.
“As an artist I am the center of my work but I walk different paths simultaneously and often they cross. I like to make things happen so I’m not totally in control and often create by interaction. The many works that came into existence after the video ‘Made in China’ in 2012 (part of the video program of CEAC), were created walking one path with several crossings and are now bundled in the book.”