UP ABOVE DOWN BELOW 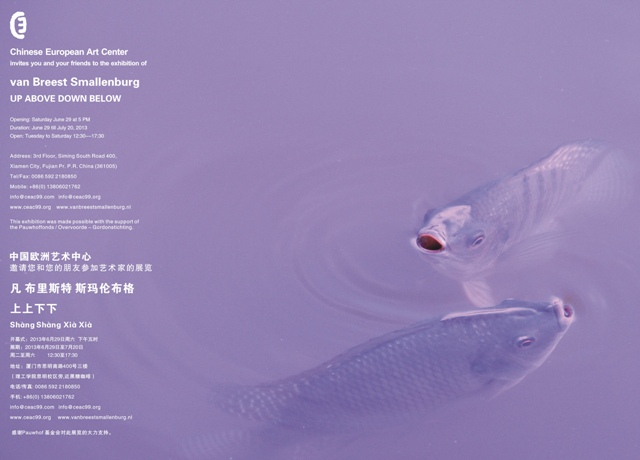 Van Breest Smallenburg is a visual artist based in the Netherlands, Amsterdam and is visually investigating the interaction -time & space & human- through artistic interventions: multidisciplinary installations, video installations and art projects in public space. In this visual research, concepts as connection and the unborn possibilities of void play a central role. Van Breest Smallenburg explores temporality substantively in different ways in various artworks and tries to depict the flow of time itself in (video) installations.

Van Breest Smallenburg is doing an individual research project about “transforming the crystallization of the volatile” via visual investigations. These transformations are shown on different locations in a specific form only once. Natural performance will be included in the (video)-installations, which are tailored to the conditions of the exhibition space. In the visual investigations the artist goes in search of clues in the environment.

Personally the artist feels a long-standing connection with China and is already for many years being intensively involved with internal martial arts. This is reflected in the works of art, influenced by a philosophic interest in Taoism and in nature. Van Breest Smallenburg did investigate the relation between internal martial arts and visual arts also together with students from Xiamen University doing the workshop “Research on the impact of internal martial art meditation on the visual art design process!”

In Xiamen at the Chinese European Art Centre Van Breest Smallenburg is going to exhibit a multi-screen video-installation in her solo show ”UP ABOVE DOWN BELOW” in Chinese 上上下下 (shàng shàng xià xià). The title is referring to the content of the images. In this video-mapping installation the temporal plays an important role and all the images shown, were recorded in Xiamen.

The projected images on moving screens transform every moment to the past. In the videos, the artist shows images reminiscent of life UP ABOVE as well as DOWN BELOW. What’s close-by on several levels is very far away on the other hand and is input for the screened images. The soundscape accompanying the moving images include sounds from Nanputo temple in Xiamen and from radio-plasma waves from outer space.

Van Breest Smallenburg is staying at CEAC in Xiamen from April to July and is thrilled to reshape on a skin-to-skin level the connection between being a European artist and contemporary Chinese life, art and culture through this residency.