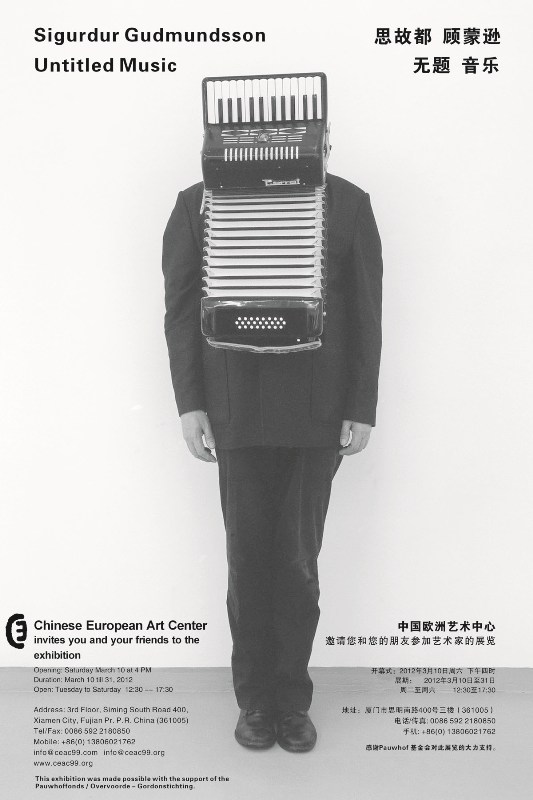 Sigurdur Gudmundsson is born in Reykjavik, Iceland 1942 but he has been living for the longest time of his life in other countries. He studied art in Iceland and Holland and was an art teacher in many art academies in different countries.

When The Chinese European Art Center started in November 1999 it opened with an exhibition of Gudmundsson who has been closely involved to the CEAC all the time.

Sigurdur Gudmundsson is best known for his photographic works which were always based on poetry and philosophy. His work has been exhibited in many countries in the world. At this moment he has a retrospective exhibition which just opened in Tonder Art Museum in Denmark. In two weeks time he has another exhibition in Paris called:
Petite Retro coming up, opening March 24th 2012.

In this exhibition Gudmundsson is showing new works from the past two years. The works in the exhibition are photo works, videos, performances and objects.

In the book Mutes which was about Gudmundsson’s art he says the following:

It is not something built on an idea that then becomes visual, but something more like a molecule: something that doesn’t present but is the object it self or the characteristic of it.

I want the work to create a new kind of intelligence that is new to me.
My art is not showing my opinions on one thing or another but it is opinions that have yet to come to me.

When I understand an art work I am always disappointed, I much rather like to believe the work than to understand it.

I prefer to eat the cake itself rather than reading the recipe of it.