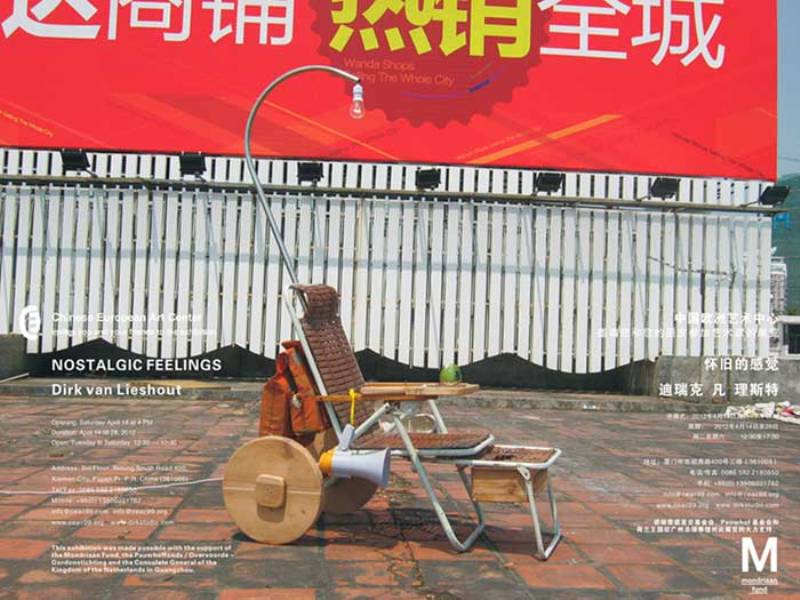 On Saturday April the 14th at 4 p.m. the Chinese Art Center will open an exhibition by the Dutch artist Dirk van Lieshout entitled: ‘Nostalgic Feelings’.

Dirk van Lieshout is born in Deurne,the Netherlands 1973 and has been living and showing in different cities around the world. He studied at ‘the Ateliers’ in Amsterdam.

Van Lieshout works with different media such as installation,sculpture,drawing and models.Even at art school he had a preference for constructing temporary accommodation: for material that was ‘still in motion’. The theme – if any comes up at all – is the conditioning of human life. His work often takes place in public spaces. Sometimes his works are ‘instruments’ or tools to understand or learn about the surrounding. His installations are actually experiments, carefully matched to their environment and anticipating group behaviour.
Performance is an important element in his work and since 2005 he’s realizing mobile studios around the world. The mobile studio’s shows ideas, thoughts and reflections about the surrounding. Besides his ‘site-specific’ work he makes models in his studio.

In the exhibition ‘nostalgic feelings’ van Lieshout shows his latest works he recently made in Xiamen during the four months he lived in the city. The works in the exhibition are performances, models, installations and all the works will be shown outside on the rooftop at the CEAC.