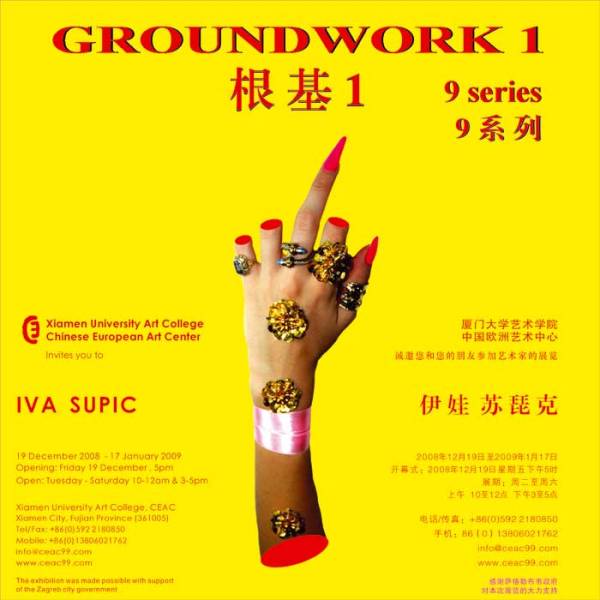 My residency at the CEAC proved to be more fruitful for my work than I even dared to hope before I came to Xiamen. “Groundwork 1, 9 series” is a project that can serve me as a base for my future projects, hence the title groundwork.
The central piece of GW 1 is a work titled Relic One and Two.

“Relic One and Two” is a bronze sculpture consisting out of two pieces; one being a cast of my hand and the other one being a cast of Stevens Vaughn’s hand. The idea for this work is a hierarchy of the art world. In this case, my hand represents one of an artist and Stevens Vaughn’s hand represents one of business and art world. Every artist needs somebody from the world: collectors, curators, sponsors or agents. This makes art worldly rather then holy and the idea that in art there is a point of perfection, as in nature one of goodness and completeness can be overcome as something too romantic and perhaps too old-fashioned.

Relic as an object represents perfection; it is a part of the perfect body, the body of saint. Hand is a part of the body we give or take with. Relic One and Two is a collaborative project between two stereotypes in which these two opposites come together.

Three photographical studies for Relic One and Two are also exhibited in this show.My thoughts after coming back from casting my arm for the work Relic One and Two:
I was hoping the burned skin on my left arm would not heel. I was hoping it would burn forever. However, it healed.
I broke down in disappointment; to give is to take, and I always hope to give more then I take. It is a bumpy road, though and I seem to fail most of the time.
In works “Emotions. Just a little bit.” and “Small heritage, house of love” I analyze the image of a black hole, circle or shape. Text from the video explains the process behind the work.
“I could have done it on my own. Small heritage. House of love. Images, which relate to the black hole of my mind. Dark, dead, brown and gray. Innocent black and gold. Moving a small object with me. Living with it without possessing an idea about it. Fragments of action and thought. Split to pieces through visualization, which becomes material through art. I am stepping on a broken mirror. I am walking in the dark.”

I am using the image of the back hole as a focal point, a point of concentration without beginning, without an end. Neutral point, which serves as a solid ground for any kind of existence; a piece of white paper or an empty space where anything can happen.

The works “I want this more then you” and “Miss Curator’s anus” refer to the art world and to my opinion about it, while the work “Lao wai” refers to my position in China as foreigner.

Notes for a painting “Miss curator’s anus”: Art is about telling the truth, not about licking asses, that is what I think but when time comes, I am ready to go further than that, if you know what I mean. Because I as an artist am unconditionally devoted to my art.
Iva Supic