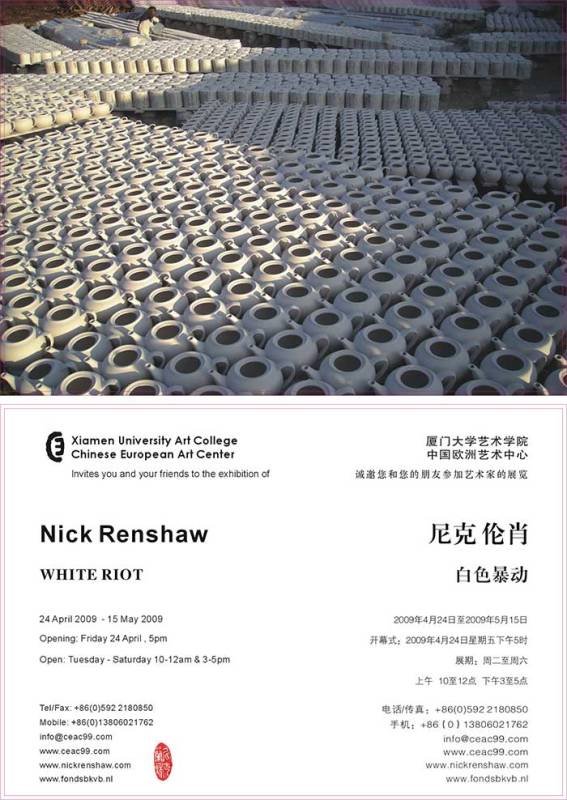 British/Dutch artist Nick Renshaw is in residence at the Chinese European Art Center in Xiamen for the months March April and May of 2009. Towards the end of this period he will present work in a solo presentation that is both a summation of important general areas of his artistic practice and also a representation of the influences he has garnered during his time at CEAC and in China.

Renshaw is interested in the apparent interconnectivities that exist within his work, in the subsequent development of his visual language, and the connection with and between the environments, places and influences he has come into contact with.

A Jungian explanation of oriental thought relates to an interconnection between all elements, an organic all-absorbing process, rather than Western rationale where cause and effect relationships are constructed and followed.Renshaw’s own interconnective process finds therefore a very personal parallel within the workings and behaviour of Chinese society. His predominantly and at first seemingly Western perspective and background in conjunction with this apparently Eastern, oriental thought and working process gives his work a unique character.

The exhibition ‘White Riot’ interconnects visually a number of significant ideas and interests in Renshaw’s work. The name itself refers directly to the title of a song with the same name from the punk generation of the late seventies. An important symbol not just in terms of the energetic and positive appeal such creative spirit embellished but also because of the personal echo this creativity and period in time had at an embryonic stage in Renshaws own life.

Ideas of desire and yearning are important concerns in Renshaw’s work. Desires that can lead to a world of sentimentality, of imitation, of mimicry and of idealism. An idealism where devotion to preperceived images is particularly apparent. Whether this be a desire for the aclaim of the Rockstar and all the satisfaction this apparently provides, the ‘Wannabe’ culture, or the fascination of Eastern and Western cultures on and with each other. The longing for involvement in one anothers worlds are issues that Renshaw observes in reverse ways and at different levels within both Eastern and Western cultures.

Renshaw’s visual language has involved the practical, visual and theoretical use of the material clay for many years. He has travelled and worked around the world coming into contact with protagonists of this material from a wide variety of viewpoints and cultural perspectives. In this exhibition he will emphasise the desires of contemporary cultures and that of Eastern and Western societies by collaborating creatively with a colleague Chinese porcelain master artist to make a porcelain sculpture based directly on an iconic photographic image for that of the Rockstar, and one importantly associated directly with the group responsible for the punk anthem White Riot, The Clash.

This work carried out in the almost mythically associated porcelain regions of Fujian province relates consequently to ideas of Eastern and Western culture, trade links, aesthetic influences, social interchange, art history and of originality. The ideas of originality and devotion are expanded on in other works in the exhibition. Connective drawings and sculptures, superrealistic paintings drawn from photographic images of ancient porcelain working methods and sculptures that echo and mimic the ideas of desire and the visual language associated herewith.