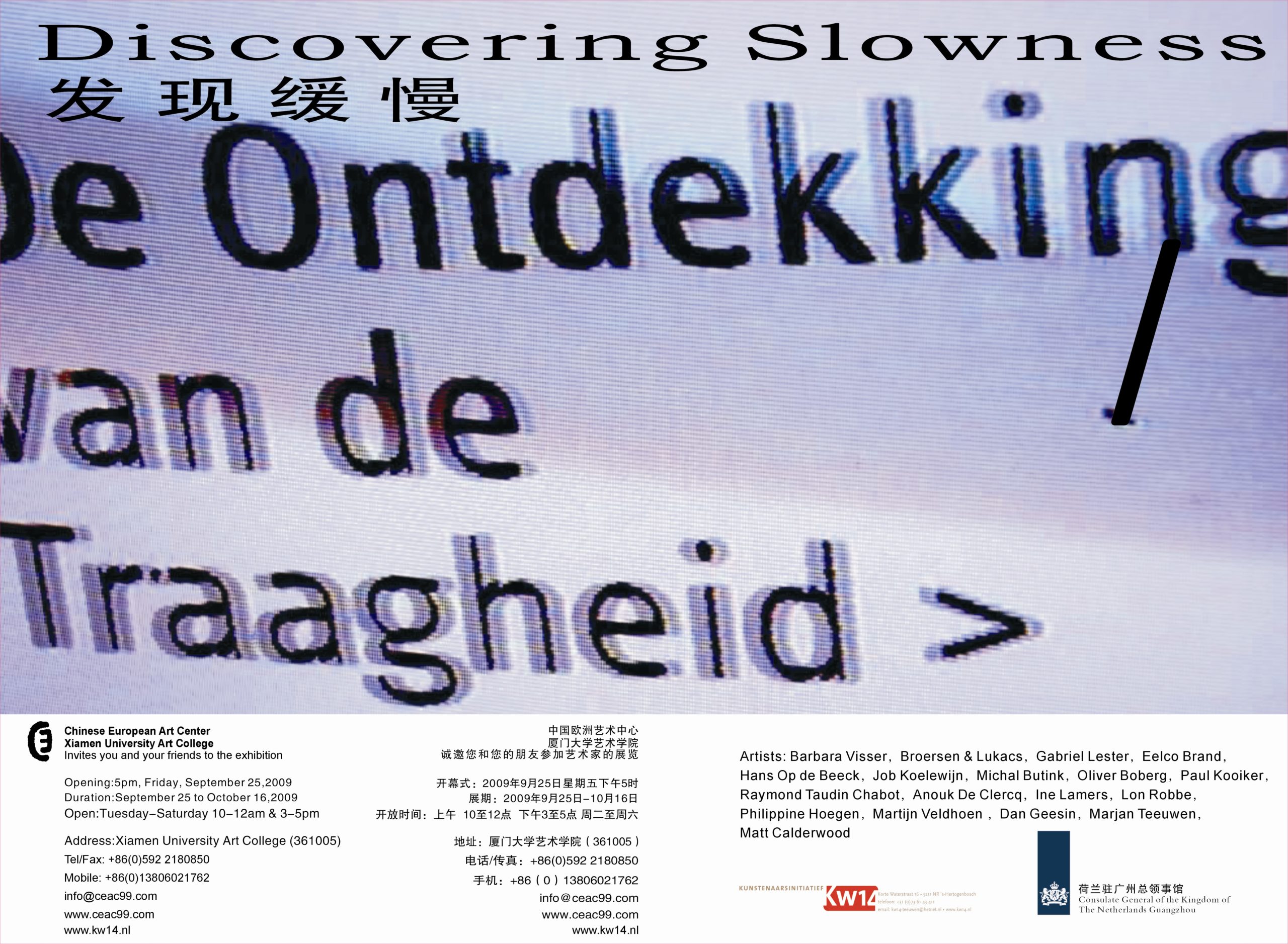 During my search for a producer of projectors who would be willing to enter into a mutually beneficial collaboration with KW14 in the context of the Discovering Slowness, I met a public relations employee of a multinational. No, they weren’t interested in sponsoring or collaboration, not wishing to be associated with something like slowness. This anecdote is as telling as it is trendy and characteristic of the times. Eventually, Epson Holland proved to be willing to generously support the exhibition by providing all the necessary beamers.

In art too, fashions and trends dominate, albeit less compellingly than in former eras; current times are characterized by an anything goes character. The time of avant-gardes and movements has been behind us for some decades. This does not mean that there are no hypes or common loves. One moment painting is hot, the next it is pronounced dead, then the documentary tradition is in the spotlights or much attention goes to new media. At the moment imagination rules again, so I’ve heard. To me this sounds peculiar: in my opinion, imagination and inspiration are essential characteristics of art, they cannot be subject to trends, they are of all times and ages, no Zeitgeist or hype can change that. Apart from intrinsic and formal layers of meaning, personal necessity and relevance to current times, imagination and inspiration are the very cornerstones of a work of art. Beauty is another thing that I like to see in a work of art. These are the basic principles that have guided me since 1993, the year I started KW14, the artist’s initiative connected to my practice as a visual artist.

Recently, the border area between photography and film has received considerable attention. It is the theme of the Discovering Slowness exhibition, which highlights this transitional area from the perspective of the moving image (not the photograph), and consists merely of projections. The emphasis is on autonomous works of art dealing with the human condition – works of art that show a broad range of human existence in their personal patterns and necessity.

I am very pleased that we can show the exhibition Discovering Slowness, at the Chinese European Art Center, Xiamen University we did make a selection from the exhibition what will be shown. The exhibition has been showed in 2’8 at National Centre of Photography of the Russian Federation, Saint – Petersburg and at the Centre of contemporary Art M’Ars in Moscow. It is a big challenge to present the participating artists to the Chinese public in an entirely different setting. Surveillance cameras are all around us, cell phones are equipped with a camera function and monitors and vide screens accompanies us permanently, both inside and outside our homes. Images are there for the taking. Artists, too, are inspired by these uses. It is striking that in these times of innovation the border area between photography and film would be topical. It is an area that is almost synonymous to limitation and deceleration. The transitional area combines characteristics of photography and film, but also has qualities all its own. As a result of the digital revolution, photography and film are increasingly interwoven, which has its effects on both disciplines. Moving images are frozen or slowed down to the extreme, while still images are set into motion.
State-of-the-art digital and analogous techniques provide artists with an inexhaustible range of possibilities. The specific characteristics of film and photography can be fiddled with through manipulation and reorganisation of the elements of movement, time and space. Film, for instance (a medium that owes its very existence to the passage of time), can be decelerated or stopped, repeated endlessly, stripped of its narrative structure or limited in its focus. Photographs (frozen, still moments by definition) can placed in a moving sequence. In this case, movement is not primarily used to tell stories, but rather a visualisation of time. The camera viewpoint is often fixed and the projection tends to focus on one single event or one space. Drawn-out moments that are a highly cinematic in nature. A clear narrative structure is often lacking, allowing much space for the spectator’s imagination. Delineation is the common denominator for the stylistic devices of the border area. Delineation of time, delineation in movement, delineation of space and delineation in the story line. Deceleration is a much-used method here. Other methods include the use of close-up, repetition (often in the form of loops with a perpetuum mobile character), discontinuity and simultaneity. With the use of these stylistic devices, often borrowed from the world of cinema (there has always been a strong interaction between the worlds of cinema and art) intuitive layers of meaning (in an intrinsic, psychological and aesthetical sense) are added to the works of art and the intensity of the visual experience is heightened Discovering Slowness shows Job Koelewijn his film Sur Place (2003). This video Projection shows a cyclist, balancing on his bicycle (sur place), waiting to dash away.

In retrospect, some remarkable developments in the history of art may be seen as precursors of the current trend of working in the border area between photography and film. The first to be discussed here is the tableau vivant. The tableau vivant (emerging as an art form in the eighteenth century) with its allegorical and mythological content, often referring to classical painting, has influenced photography, film and performance art to a great extent. The light boxes of contemporary artist Jeff Wall are a direct reference to history painting and the tableau vivant.

A number of works at the exhibition can be placed in the tradition of the tableau vivant, such as All together now… (2005) by Hans op de Beeck. We see three groups of table companions, portrayed in three different locations; a group of elderly people with coffee and cake after a funeral; a sad bride and groom with their guests, and a group at a birthday dinner: a well-to-do gentleman with his family in an overly designed interior. In one continuous and slow movement the camera records the psychological portraits of the guests. In Barbara Visser’s work themes such as acting, real/fake and remakes are key concepts. She shows her film Philippa (1998). The film has been shot in the Van Loon Museum in Amsterdam and is characterized by a minimum of plot and continuous repetition, with Philippa van Loon acting out an ingenious role play in the monumental spaces of the seventeenth-century museum. Raymond Taudin Chabot’s work fits into this tradition too. The exhibition show two of his works, his most recent Disposition (2006) (with well-known Dutch actor Gijs Scholten van Aschat). The film can be seen as a still life, with men figuring as animated sculptures of sorts. The films have been shot in an excruciatingly slow tempo: psychological portraits, zooming in on the characters razor-sharply.
The factor of time is the main difference between a frozen, still moment and film. Paul Kooiker presents a recent work on eight interconnected monitors. Several films of model sessions and spurting fountains are shown, and then there is the film Grasmaaier (Lawn Mower, 2005). Grasmaaier shows a Kooiker-type of woman in a bikini mowing the small lawn of her terraced home, endlessly walking her little rounds; a small poodle enters the picture for a moment. The themes that characterize Kooiker’s work cannot be missed, in this case lush vegetation and romantic skies. Models throwing around a ball between them, doing a handstand or spinning around in a decadent lounge chair. In his studio I was struck – not for the first time – by the power a minimum of movement motion can add to an image. The simple fact that the model has eye contact with the spectator generates an additional impact.

This is also true for Martijn Veldhoen’s latest film, Public Spaces (2006). Using digital techniques, large numbers of photographs have been transformed into moving images, into film. In its execution this film is entirely different, though. It does have a plot and a storyline In Dan Geesin’s film In the Garden (1998), not photographs but 35-mm slides have been edited into a film. This film does not show flowing movement: separate moments are turned back one frame, then moved forward two frames, et cetera. This technique of jerky movements has its own intrinsic relevance.
Oliver Boberg’s films may also be considered moving photographs. They evolve around simple events, such as waves lashing the coast (Klippe/Cliff, 2003), or fog lifting in a forest (Wald/Forest, 2002). The fact that these are constructed realities, notably scale models, lends his work a unique position.

The latest film by Michal Butink refers to the same theme. In Flash (2006), tourists posing for a photograph in an Asian country light up in the flashlight, and are frozen in the same instant.

Eelco Brand and Anouk de Clerq both work with 3D techniques. Eelco Brand shows his latest film, entitled SB. Movi (2006). A person walking through a dark spruce wood (the movement of walking is visible through the movement of the camera) moves from the dark to the light of an open spot. Several artists in the exhibition have a direct relation to the subject of light, both formally and as to content. In Matt Calderwood’s film Strips (2005) we see the backside of a substantial row of striplights; an invisible ball smashes the lights one by one, the light disappears step by step, making way for darkness.

The exhibition Discovering Slowness explores this border area, showing all dimensions from photography to film. One final consideration: would so much slowness not be boring to the modern exhibition visitor, who has been treated to a considerable amount of entertainment over the last few years? Initially, that thought crossed my mind. But as the organisation of the exhibition progressed and the list of participating artists grew, I knew better. So many different approaches, so many different themes, all this makes Discovering Slowness a very cohesive and multi-faceted exhibition.