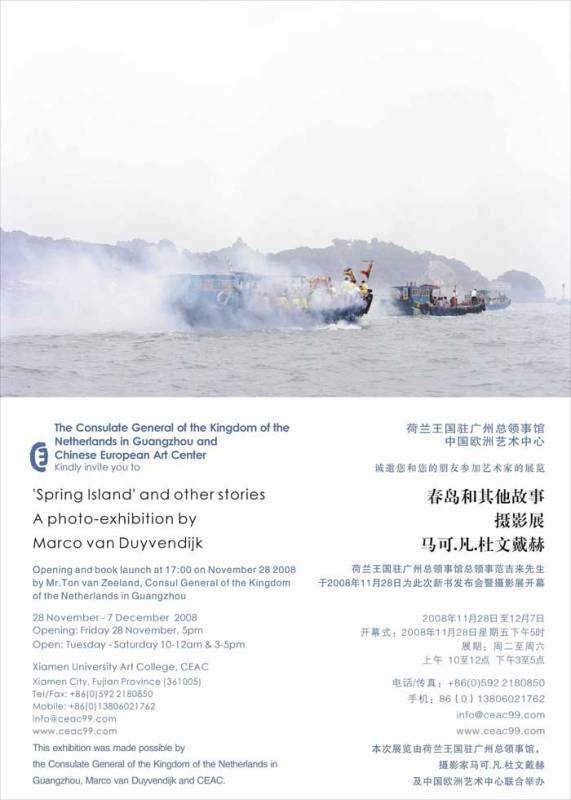 About the book and exhibition Het Lente-eiland

J. Slauerhoff, one of the most well-known Dutch writers of the twentieth century, worked as a ship-doctor on the Java-China-Japan line in the 1920’s and in this capacity made extensive journeys along the ports of China. Highly fascinated by Chinese culture, Slauerhoff, when his ship arrived at a port, would hurry ashore and emerge himself in the unknown and mysterious cities. He would breathe-in the atmosphere, write diary-entries, letters and reports en would use these later as a source of inspiration for his literary work.

One of his most famous stories Het Lente-eiland was published seventy-five years ago for the first time. This story was inspired by the island of Gulangyu, just of the coast of the city of Xiamen. This spring Dutch photographer Marco van Duyvendijk was invited by the Consulate-general in Guangzhou to make a photoseries inspired on the original story of Slauerhoff. He roamed around Gulangyu for a month with Het Lente-eiland as his source of inspiration.

On the 28th of november 2008 the consulate-general of the Netherlands in Guangzhou would like to present the publication of Het Lente-eiland in Xiamen. The beautifully designed book will be bilingual, containing both the original version of Het Lente-eiland and its first ever Chinese translation, combined with the photos of Marco van Duyvendijk.

Marco van Duyvendijk (1974) is regarded as one of the young talents in Dutch photography. His work, which was made mainly during his extensive travels through countries in Eastern Europe and Asia, was praised internationally for his personal and intimate approach of his subjects and his subtle use of composition and colour. His work has been exhibited in recent years in the Netherlands, Germany, Switzerland, France and the United States. He has published three photobooks. Also his work was shown in many publications, both in the Netherlands and abroad.
www.marcovanduyvendijk.com