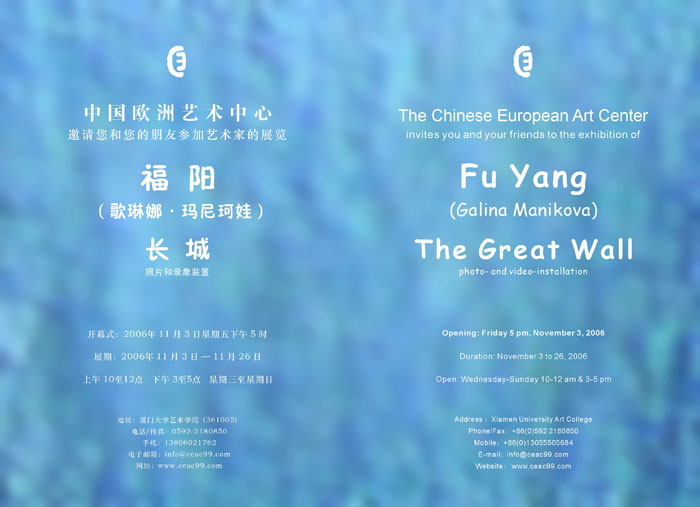 About herself, about her own life in a foreign landscape, about being exposed and vulnerable, about watching and being watched. Walls symbolise exactly what has been a part of Fu Yang’s everyday struggles and experiences: exclusion, segregation and isolation.

When you enter the exhibition room, you discover that there is not a single picture of The Great Wall to see; the title is only used as a symbol, which is known by everybody. More than that, the name Fu Yang is too, only a symbol, and the real person behind this pseudo name is Galina Manikova. She is a real cosmopolitan person, born on an earlier Japanese island of Sakhalin, grown up in Moscow, educated at an art academy in Jerusalem and presently living in Norway. More about her life and work can be studied on her web site: www.galina.no.

She has worked with transparent photographs on glass and silk since 1974. The techniques she uses are based on old photographic methods and handmade photographic emulsions. They are both complex and challenging. During the course of the last 30 years she has achieved a solid knowledge of the aesthetics and the traditions that follow that particular way of art and a certain international acknowledgement for her research in the field.

She also works a lot with video and computer art, which can be studied on her web art projects like www.galina.noand www.wailingwall.no . All her installations are presented as a part of these web projects that are the final destination. A smaller version of this project has been presented at the Photography Biennale in Istanbul in September 2006. This project will later be shown at several galleries in Norway, France, Japan, Russia, and even more other countries. So the project will keep growing and changing according to how her thoughts and concepts develop in the run of time and adjust to different places.

Photographs of a girl with a mask over her mouth and holding dolls upside down are transferred to very thin silk and mounted in the middle of the exhibition room as the pictures are transparent, they throw shadows and change depending on point of view and light conditions. Many portraits of many Chinese faces are hanging as a long line on the wall by the entrance. The same faces are projected on many long panels of white silk, hanging from ceiling to floor in several layers. All that creates illusions of space and volume. Pictures mounted in several layers and in relation to each other create a combination of two-dimensional images and three-dimensional effects. Texts and symbols are a part of the visual impression. The project is going to be oriented towards an international audience; therefore language is an important part of the project. By using Russian, Norwegian, Chinese and English in combination with each other an atmosphere of some universal communication is being created.
Motives and signs are overlapping each other and are projected on to live figures moving around in this new landscape – the public. Contrasts between the motives, the signs and the forms are an important part of the impression. Light and sound are used to underline this impression. There is also a part of the silky wall containing of white panels with holes burned in an irregular pattern. The public is offered an opportunity to write small messages on small notes of paper, which may be wishes or complains, comments or regards. One can chose between white, black or red paper notes. The colours have a certain symbolic meaning, which will show the mood of the public, when the notes are placed in the holes in the white silk panels. In that way the public is invited to participate in creating the exhibition. Notes will later be scanned and placed in the wailing wall of the Internet project www.wailingwall.no.

Each new exhibition will bring more notes in more languages to the web site and more faces in the line of faces on the wall. Photo- and video-documentations of the project are also going to be published on the website www.wailingwall.no