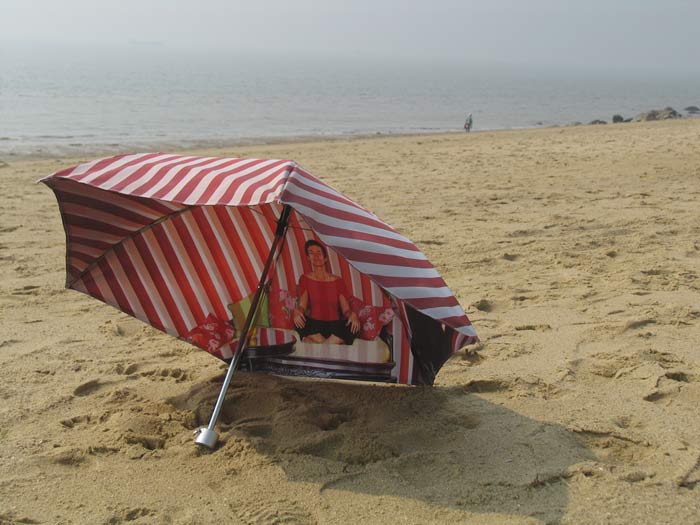 It has been proven that humans as well as animals are exceptionally sensitive to the changing patterns in landscape. Variations such as forest to plains or water to mountains become a rhythm when traveling through them, and can affect the mood and awareness of those taking that journey. Details fall back and forth into the field of vision and contemplation, while the larger grandeur of the landscape as a whole continuously presents itself. Ultimately a landscape is endlessly reconstructed in the perception of those traveling through it.

It is within this notion of rhythm, perception and reconstruction that the work of Sanja Medic becomes relevant. For her a landscape is a summation of patterns which can just as easily suggest itself inside a space as outside. The installation itself seems always affected by an outside force. In previous works this force is present in shelves of books which seemingly bend to the force and rhythm of an earthquake, or a large mass of wallpaper protruding from the wall into the sharpest of points, leaving the smallest amount of room for passing. Whether through scale model or life-size, in her installations each singular part seems possessed or influenced by a natural force that has given it a specific position and character, which together constitute a setting, or landscape.

For this newest work she has again chosen an environment – inspired by a photo taken in the living room of the Night Lily, a beautiful guesthouse on Gulangyu Island – with already a specific character: red-white striped walls, a floor with a strong geometric pattern, and a balanced floor plan (two windows and a door in the middle). The presence of the walls and floor is profound due to their repetition and play with perception; each is obviously flat in their function yet suggests depth and space by their design. It exactly this repetition and suggestion that is the starting point for this work. The umbrellas borrow – or sublet – the pattern of the given environment and extend its suggestion of space through their own unique form, suggesting a third dimension. Some umbrellas remain slightly closed, others open in order to underline the sense of rhythm, but as well imply the notion that the installation may be growing still, or wilting away. The soundtrack to be heard abstracts the instrumentality of the umbrellas, as well as emphasizes the concept of the space inside in relation to outside. The distinctiveness of this installation is her use of the umbrellas – the Chinese being the first to invent waterproof umbrellas over four thousand years ago. Not only are they therefore a tribute to her temporary (cultural) surroundings, but also a possibility to create an interior in a real-scale, and afterwards take her – collapsible – installation with her when she leaves.

An umbrella, according to popular superstition in Europe, should never be open indoors or you will bring bad luck on all the people residing in the building. It is thought that this superstition originates back when the purpose of the umbrella was to act as a sunshade. If opened indoors the action may be construed as a direct insult to the sun, which was revered in many societies. For Sanja Medic the purpose of the umbrellas is not to ridicule this superstition or offend any aspect of nature, quite the contrary. They represent the all encompassing force of nature, whose presence does not end at the doors and windows of a space. It resides also in the manner in which space is designed by that what goes into it.