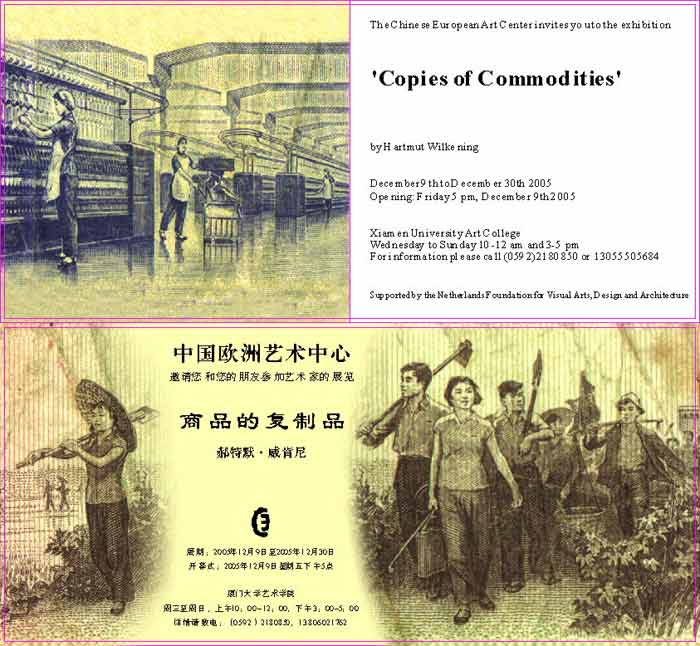 “A Commodity appears at first sight a very trivial thing and easily understood. Its analysis shows that it is, in reality, a very queer thing, abounding in metaphysical subtleties and theological niceties” (Karl Marx)

‘Copies of Commodities’
More than exchange value of commodities and its copies, Wilkening is interested in its symbolic value and ideological impact in China. The most striking example he finds in the design of Chinese money: Today’s Chinese market economy uses bills with the portrait of Chairman Mao on it.

Wilkening is attracted by the harmony in which model products and its remakes seem to coexist, for example the Volkswagen-Passat imported from Germany riding side by side with the look-a-like Shanghai-made Santana, or video-shops offering legal dvd’s. as well as the copies ones. In this mix authenticity is stressed and Wilkening is driven by the question how the message that is carried out by the original generates in its copies.

Wilkening worked in Xiamen from September to December 2005. His exhibition in the Chinese European Art Center will show sculptured portraits of Chinese representatives and figurative images dealing with positions in today’s market economy. The human factor is essential in Wilkening’s approach. The figure stands central in his work. For the show he uses valuable materials as well as the fake copies of them in order to interfere with the symbolic and ideological value of the sculptured protagonists.