About Amy Thomas and Oliver Irvine 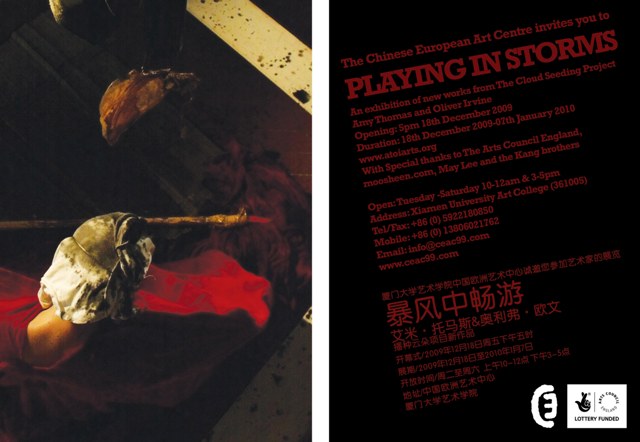 Amy Thomas and Oliver Irvine have been working collaboratively over the past years instigating many projects most notably ATOI ARTS GALLERY, a project space located on a busy high street in England where the general public where invited to view contemporary art at a very accessible yet challenging level amongst high street stores. In June 2009 the artists launched ‘The Cloud Seeding Project’ with a solo show at Gallery 35 in Manchester. This 12 month project has formed and still continues to form the basis for intensive research into Cloud Seeding. Cloud Seeding is a form of weather modification used to alter the sky by attempting to change the amount or type of precipitation that falls from clouds. The method is used throughout the world, most commonly however in China. Recent examples include steering off the rain at the Chinese 60th Anniversary celebrations, the unprecedented snowfall in Beijing and the artificially induced rainfall to relieve drought in the Fujian province in November 2009.

For their solo exhibition ‘Playing in Storms’ at the Chinese European Art Centre, the artists utilise the idea of weather modification to explore global and social issues, yet still allow for space to open up wider questioning. They say the works in the exhibition speak on ideas of belief systems, communication, broken cycles, control, fate and possibility. In stead of exhibiting finished works with distinct messages, it seems the artists are aiming to create a field of raw communication where different energies meet, utilising sculpture, performance, painting and photography to do so.

“We have been cautious not to allow The Cloud Seeding project to simply comment on and critique the concepts of weather modification, to simply do this would , for us, be tackling something so real and so blatant that it would need no metaphorical description to bring it’s bizarreness to attention.
However we are inspired by the metaphorical and literal implications of weather modification, in global, social and economic ideals. (..) Humans can try to play god and attempt to control the weather. It is a concept that has the potential for catastrophic or revolutionary outcomes.”

‘Playing in Storms’ will be exhibited at the Chinese European Art Centre from the 18th December 2009-07th January 2010. The Cloud Seeding project can be followed online at www.atoiarts.org. The project will be concluded in England in June 2010.