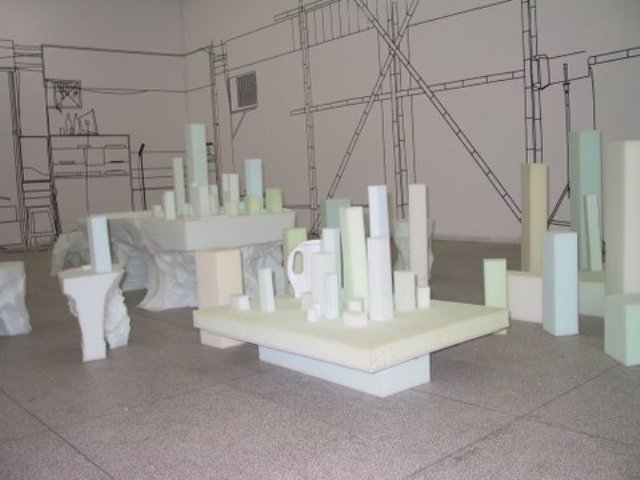 Aam Solleveld (Rotterdam1969, The Netherlands) and Erik Olofsen (1970, Aalsmeer, The Netherlands) will present new works. Aam Solleveld makes drawings about spaces. In the CEAC she draws with black cello tape directly on the walls. ‘Walls are not just a carrier for artworks, I intend to make the viewer repeatedly switch between seeing the drawn space and the actual space.’

In October 2002 in the Chinese European Art Center (in a group exhibition of both Chinese artists and artists from the Rijksakademie in Amsterdam, The Netherlands), she made a tape wall drawing of a red bar.

In her new wall piece Chinese street archetypes, architecture and daily objects are combined with elements of mass media and fast-culture. The tape marks the borders between spaces and matter. The wall functions alternately as solid matter, air, distance, as a food counter, or a sidewalk. With a minimum of information (few lines) objects are characterized.

Solleveld demonstrates the equivalence of the daily things and the mystic. Mysticism expressed in ordinary objects. The idea that emotions and perceptions can be reflected in matter. These implements that feelings can be expressed in for example an electric wire hanging in a street. Erik olofsen will be showing sculptures and photographs. A binding factor in the installations, photographs and video’s Olofsen makes lies in the spatial experience of them.

In general, the works give an impression of a landscape or surrounding in witch scale, gravity and time are being redefined. The works have a mental character, where by, for instance, one’s psychological state is made visible through materializing this in a collection of objects surrounding the person.

Olofsen has always consciously played with the game of control (controller/controlled). For years he’s been making work in which objects are divested of their power, picked apart and scattered through a space. At the same time he reconstructs things, assembling them and adding new elements. Sometimes he literally sets the objects in motion. These reconstructions, as he calls them, keep the world at arm’s length, yet simultaneously bring it closer. Reality is dislocated but restored to unity in the same gesture, however clumsy, as though in a lengthy exorcism process of the angst we all feel when confronted by a disintegrating world. Erik Olofsen did receive for his work the prestigious Prix de Rom the honorable second price.

This project was realized thanks to a contribution of the Netherlands Foundation for Visual Arts, Design and Architecture