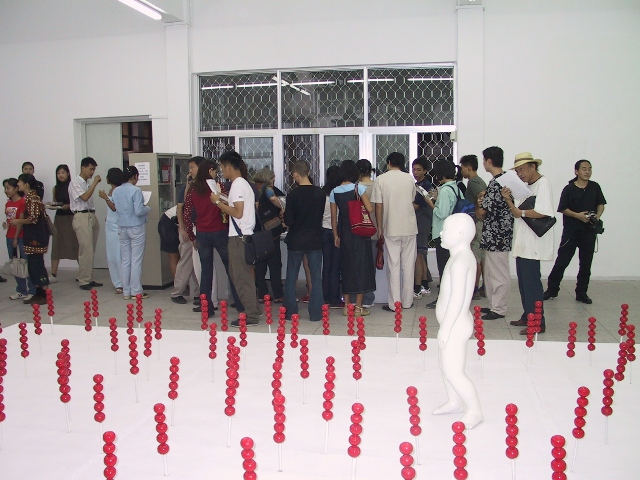 Wang Shugang’s works is small and simple comparing to those complicated and extravagant modern installation art. Wang Shugang’s artistic language is of populace, comparing to the modern artists who are talking about for the populace but actually doing the noble creation. Small and simple visual impression represents Wang Shugang’s personal view and artistic taste, and at the
same time the artistic language for the populace represents his hope that is, to break the self-appreciation situation, to get close to the people, and to fulfill the purpose of exchanging with the people. As to the former one, we can easily get the smell of Chinese traditional artistic appreciation; but to the later one, we can also feel the spirit of post-modernism. In the space consisted of personal experiences and public exchange, traditional concepts and modern ideas, Wang Shu gang endlessly seeks for his own supportive point for his creation， and expresses his feelings and thoughts by the installations.

Actually, when Wang Shugang was still a student in the Sculpture Department of the Central Academy of Fine Arts, he was facing this new artform with a conflict feeling. It was when he immigrated to Germany in 1989 than the started to know about this artform and took it as his creation means. Now, Wang Shugang is in his middle age. After 11 years artist life abroad, he is more sure of the way to make installations. In his point of view, installation is not only an international language, but also an effective tool of visual expression. Its effectiveness lies in that it can help the artist to use various materials to fully express his personal experiences in a contrast space, so that some meanings which can not be expressed by the traditional language can be expressed more clearly.

Although Wang Shugang tries to express clearly during his creation, he is still not a person who eats on the talbe with the traditional concepts. All his artistic pursuits are developed under the rules of the modern art games. However, in the modern art rules, there is avery important content is: to emphasize on the symbol of the art not the signal. Therefore, his pursuit of clarity is the clarity of moral. This means when we look a this installations, we can not only depend on the visual feelings, but also give more understandings. In this regard, the American critic Tom Wolfe has avery inspiring conclusion. He said, “The key to appreciate the traditional art is that seeing is believing, and the key to appreciate the modern art is that believing is seeing.” The former one emphasizes the visual judgement based on the common cultural concepts, but the later one emphasizes on the visual judgement based on recognizing the cultural concepts. If we agree with his concept, then we can find how outstanding the concepts are in the modern art, and how necessary it is to understand the concepts when we appreciate the modern art.

The new installation of Wang Shugang is exhibited in the Chinese European Art Center in Xiamen University, from October 5 to October 30, 2001. In this exhibition, you will see the artist’s artistic explanation to the life meanings: “Life is like this. The world is like these one hundred sticks of red sugar-coated haws, In which you just need to live purely and naught ily.”