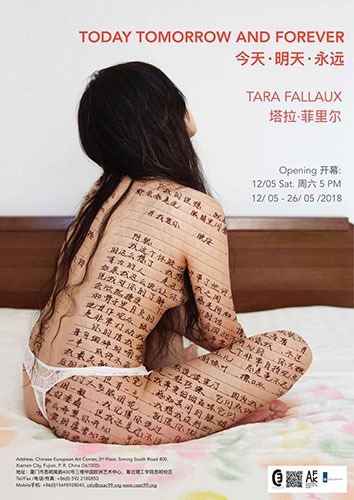 Photographer and director Tara Fallaux studied Film and Photography at various art schools in The Netherlands and the US. Once graduating from Carnegie Mellon University in Pittsburgh, Tara kicked off her career as a portrait and documentary photographer in New York. For the past 15-years, Tara has worked as a freelance photographer combining personal photography and film projects with commercial work. During these years, she has directed various documentary films including ‘Over the Rainbow’ and ‘Louis the Ferriswheel Kid’. Her most recent documentary ‘Love Letters’, a film about the nearly vanished medium of the handwritten love letter, had its international premiere at IDFA 2017 as the only NL representative in the competition.For Tara, photography and film provide a platform from which to explore her curiosity regarding everyday encounters. Interested and driven by people’s vitality and fate, a big focus point for her work is to investigate the way in which we perceive and shape the world around us. This open and human-centered approach is the common ground between Tara’s personal projects and commissioned work. Whether she is photographing and filming on assignment or for her personal portfolio, her drive is to tell stories that inspire and challenges people.

Today Tomorrow and Forever is a photo and video installation consisting of two videos and a photo-series.

About the video One night WeChat (’10 minutes): Growing up in a complete internet device driven society where social rating is a fact of life Tara asked several young people what their hopes and dreams are on WeChat. Where the obvious pressure lies in seemingly having to be perfect and presenting only the best version of yourself. Consequently even a greater longing for being able to express oneself without being judged may exist. In a busy street with random people passing by the WeChat messages she received are shown to illustrate their inner thoughts. A portrait of a warm busy summer city life during one evening and night. In this nIght we are all one.

In another video called The Letter (‘5 minutes) we hear a young woman reading aloud a love letter explaining a dream she wants to talk about with her lover. This letter is an example of how the new open minded Chinese female millennials are transforming. Where getting married at an early age is mostly not a question but a factuality the younger generation is starting to question how the traditional Chinese lifestyle still fits their way of life and love.

Tara also shows a series of photographs presenting a utopia of buildings and city parks. Photographs of promising model buildings and parks are alternated with real parks and views from yet to be inhabited apartments. On first eyes sight it’s not clear which image is real and which is a model. The world as a lush clean promising dream. The photo-series are a metaphor for what is presented in the two videos that are part of the same project; dreaming of possible lives and shaping and modeling the world around us.

“I want to inspire people to share intimate thoughts with each other, be less superficial and less afraid of what other people think of you”

Made possible by the generous support of the ‘Amsterdams Fonds voor de Kunst’ and the Embassy of the Kingdom of the Netherlands in Beijing. A very special thanks to: Writer and performer in ‘The Letter’: Wang Ji. (Rocy), Assistant and translator: Lova Yu, Retoucher photography The Letter: Patrick de bas@DOG postproduction, Assistant and location scout: Marc Boon, Equipment and color grading: Mike @ Candela co. LTD Xiamen