A travel in a world beyond 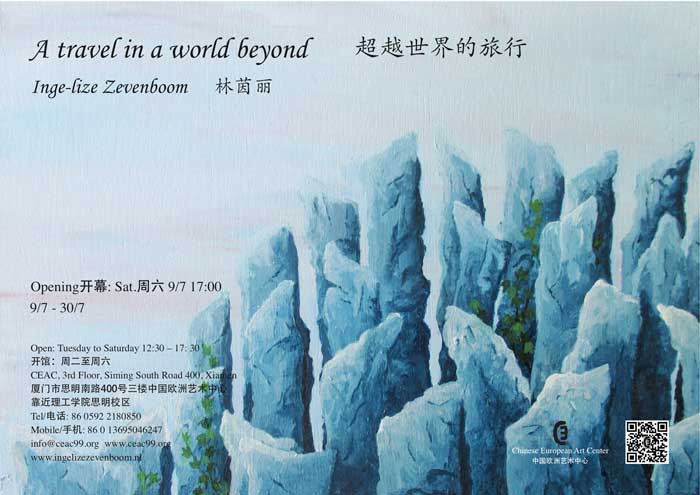 A story, a tale, a happy ending

about a world far away, but close to your heart

to be found in the middle of nature,

These lines above come as close as I can get to describe the essence of my work. I thought long and hard on these words. It was first paragraph of what I wrote to the CEAC when I applied for the residency. Coming to China has always been a dream of mine. Already as a child I was fascinated by the country. The reason for that is perhaps that here the magic that I look for in my paintings seems to be more alive. And nature in China is still mostly wild and untamed. The fulfillment of the dream to come to China was postponed for some years, because I was allowed to fulfill another dream first, i.e. studying at an Art Academy. But after I graduated from the Royal Academy of Art in The Hague, the Netherlands, there was no stopping me from going on my adventure. To China and beyond, because instead of just taking a plane from the Netherlands I took an older and far more interesting way, i.e. the Trans-Siberian Railway, all the way from Moscow to Beijing. As a consequence, a lot of the art you see here is inspired both by what I saw on that trip and by what I saw in China. It was mostly the nature of this places that inspired me. See if you can recognise the Mongolian rock formations or the Chinese mountain from the Guilin area.

The series shown here is called ‘a travel in a world beyond’ and is, of course, called after the travels that I made to and in China, but also after the trips my mind makes to another world, a world beyond, a world only I see, but like to share with you through these snapshots of paintings. I invite you to enter this world with me and, once there, to invent your own story. Because the story is there, you just have to look.