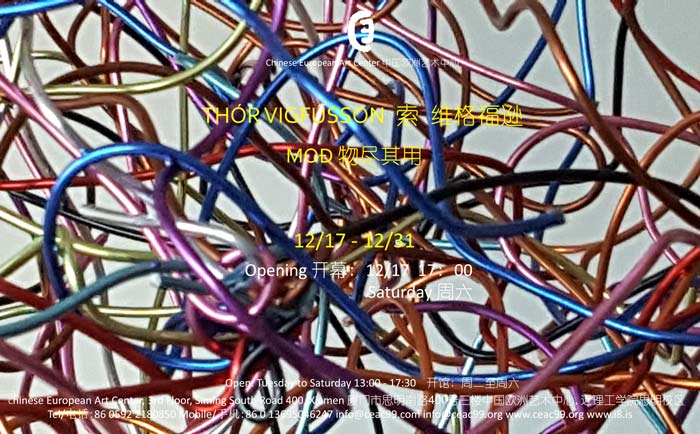 Thór Vigfússon (b. 1954) lives and works in Iceland. He studied art in Iceland and Holland.

“The art of Thór Vigfússon (b. 1954) is not highly complex, although its technical aspect is often trickier than it appears, and its world of vibrant colours keeps the eye busy. It is; colour and form. However, colour and form are not mere details in art, but rather its true essence, the basis of everything we consider the art form to be. The search for the right balance between these two elements is crucial and eternal, and one sense in Vigfússon´s works a great longing for some sort of visual solution – a solution however, that most likely grows ever more remote as the artist approaches it.”

“Thór Vigfússon comes from a family of craftsmen with a keen eye for detail. While making his way through the gallery districts of foreign cities he is often drawn to hardware stores, where he adds to his colour-sample collection. These prove useful once he has mixed his own colours by hand and has to provide exact details concerning the final finish of his works.”

“. . , the mind wanders to the basic principle of minimalism in visual art from around the middle of the 20th century, which found its outlet in the works of artists such as Josef Albers, Barnett Newman and Donald Judd. In his work, Thór Vigfússon aligns himself with this tribe of artists through the direct, straightforward nature of his art.”
(Gudni Tómasson, 2016, i8 Gallery)

Among Thor’s solo exhibitions is to mention; at Quint Gallery, San Diego, USA (2011); LA art Museum, Hveragerdi, Iceland (2003); Reykjavik Art Museum (2002) and at The Living Art Museum, Reykjavik (1998). In i8 gallery, 2005, 2010 and 2016. Beside that he has taken part in many group exhibitions in Iceland and other countries as well, through the years. He was nominated for the Carnegie Art Award in 2008 (touring exhibition to Helsinki, Oslo, Copenhagen, Reykjavik, Stockholm, London, Gothenburg and Carros, France). He has worked on a number of public commissions and frequently collaborates with architects.

All the works here are new and made here in Xiamen. Thanks to all the people who have helped me.