Lift Off – Touch Down 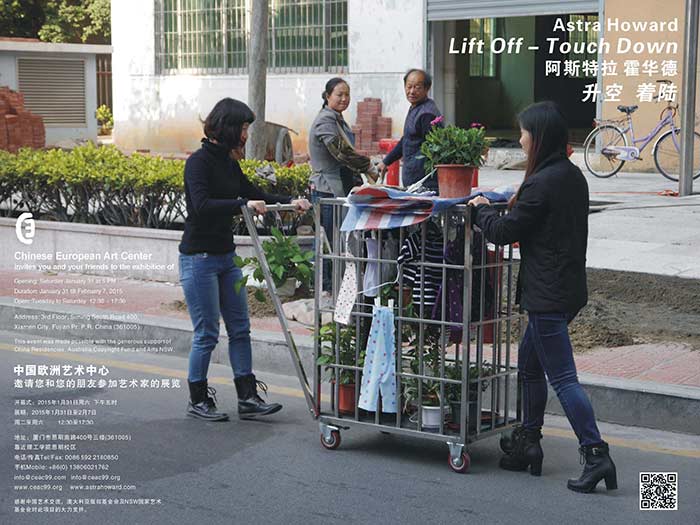 In Xiamen, Astra spent time walking the streets of the city, in order to identify characteristic features that could be extracted, interpreted and then reconfigured. In particular, wall and ground surfaces of Xiamen captured her attention and she soon began to ‘lift off’ parts of the city’s surface (the skin like membrane between pedestrian and the working body of the metropolis) and then ‘touch down’ with her original observations and interpretations. The form (scale and materiality) of each aspect of this surface/skin chosen was reimagined and the new renderings were then performed, installed and documented throughout the streetscapes of Xiamen.

Local resident’s who chanced upon these interventions, stopped to watch and then invariably talked to Astra about the meaning of her works. Many suggested ideas for additional commentary upon the city and others offered their assistance with the project being undertaken. It was apparent that people understood the reference points for each intervention and appreciated Astra’s reinterpretations as being perceptive and in some instances, amusing.

Some examples of these interventions undertaken during the residency period (December 2014 – January 2015) include- window/balcony scenes transformed into wearable objects and a transportable trolley; red carpets reformed through plant-inspired designs and laid in front of anonymous entrances; pavement tile patterns being transplanted to and reconfigured in parkland areas; ‘Opening Soon’ signs detached from specifics of a yet to be refurbished shop, reduced in scale and then wheeled around the broader landscape of the city; chance encounters with locals recorded and then displayed in construction sites; the architectural pulse of an abandoned shopping centre monitored to gauge its life/death struggle, and because of the ever presence of the sea, aquatic inspired clothing designs. Astra intends to further develop these Xiamen residency projects when she returns to Sydney, Australia.
(See Astra’s residency blog: chinaresidency-astrahoward.tumblr.com)

“I think your work touches on some of Xiamen’s current state of mind: the carpets and the opening soon trolley perfectly encompass the eagerness and excitement of a city ushering in tidal waves of new commerce, all while maintaining a closeness to the region’s natural setting through the ubiquitous potted plants.” – Kira Simon-Kennedy, Program Manager China Residencies

Astra Howard’s residency at CEAC is part of the China Residencies’ “Two To Three” program, which is generously supported by the Australia Copyright Fund. Arts NSW, NSW Artists’ Grant Scheme, a devolved funding program administered by the National Association for the Visual Arts on behalf of the NSW Government has also provided valuable support.