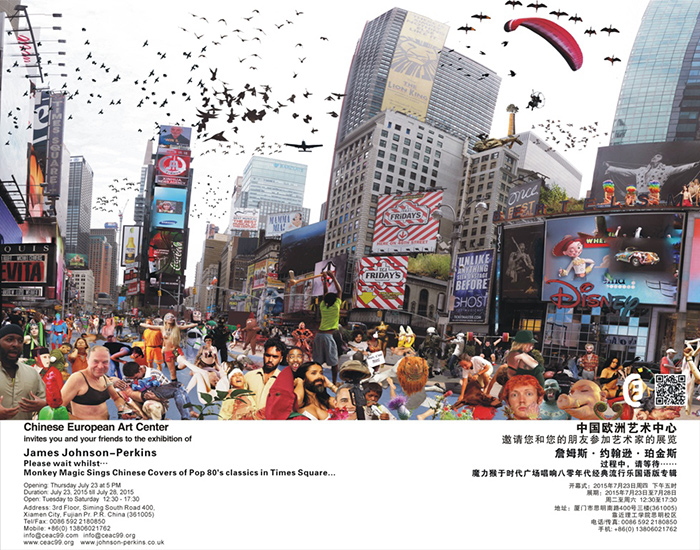 This exhibition Johnson-Perkins will show new works inspired by his time in China, alongside his most recent Panoramic Photomontage, Times Square Nude.

At once this Monkey learned to climb and run around Times Square; but its first act was to make a bow towards each of the four quarters, whilst singing ‘Beat it’ by Michael Jackson in Mandarin. As it did so, a steely light darted from this Monkey’s eyes and flashed as far as the Palace of the Polar Star in Folkestone. This shaft of light astonished the Xiamen Emperor as he sat in the Omani Cloud Palace of the Tyne Bridge, in the Treasure Hall of Holy Moscow, surrounded by his fairy Ministers. Seeing this strange light flashing, he ordered Monkey Madonna to open the gate of the Southern Heaven and ROCK OUT.

At her bidding she went out to the gate, and picked up the sacred colourful telephone…she looked so sharply and listened to the Russian voice on the end of the line, “Please wait whilst…Monkey Magic Sings Covers of Pop Classics in Times Square….” Meanwhile, on the mountain the magic rock gave birth to an egg. This egg changed into a stone Monkey. This auspicious event inspired James Johnson-Perkins to create an exhibition at CEAC.