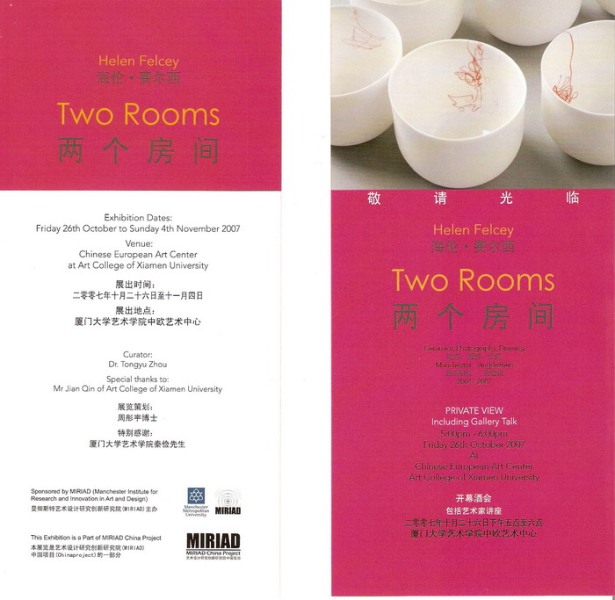 Helen Felcey is a Manchester based young artist who produces objects and sculptures in ceramic and also works as a Senior Lecture at the Manchester Metropolitan University. She has been exploring a world of white bone china for quite sometimes, until one day in July 2006, she travelled to China to undertake an artist residency; from here, her work begins to show colour, livelihood and movement.That is how the exhibition ‘Two Rooms’ came into being. It has summarized Helen’s artwork so far, but also reveals the beginning of her future work. In her own words: “I see two rooms in a house under constant renovation”.In the ‘first room’, we can see her ‘White Objects’ series. Cups and constructed paper like spoons are white, crisp and quiet, with abstracted curves and seemingly weightless forms. “The work is driven by a continual fascination by the often distant relationship between man and his environment” she says. In the ‘second room’, the work bears Chinese inspiration. Round porcelain plates line up with sweeps and smudges of line and form; Helen also presents a series of photographs taken in China. During her residency at the Experimental Factory in Jingdezhen she spent a great deal of time exploring the streets – as both the casual passer-by and the systematic observer. In the choking dust, she witnessed stories on every street ‘between destruction and development’ and felt ‘a strong sense of life’. She began to reflect further on the life of the city within the porcelain plates and her photographs. Between the ‘two rooms’, Helen shows some enameled bone china cups called ‘Red Trails’, to symbolize the changing point of her work.This exhibition is sponsored by MIRIAD (Manchester Institute for Research and Innovation in Art and Design), curated by Dr. Tongyu Zhou and with the help of Mr Jian Qin of the Art College of Xiamen University. It has been held at the Chinese European Art Centre in the Art College of Xiamen University from Friday 26th October to Sunday 4th November 2007.