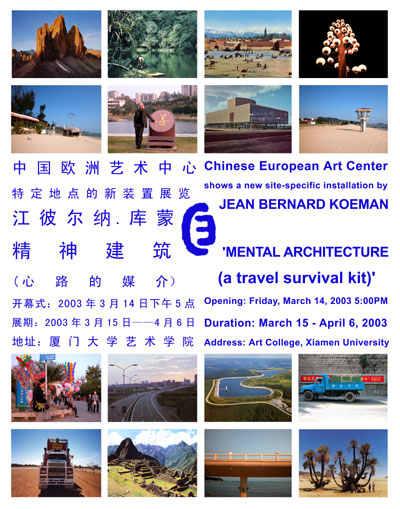 MENTAL ARCHITECTURE (a travel survival kit) is a site-specific installation which is partly directed by the measures of the space of the Chinese European Art Center. Like most of Jean Bernard Koeman’s former installations it uses the lines and measurement and also the meaning of the space. The attraction that the CEAC has for the European artist in residence; a far away and fascinating place, is enclosed in the ideas for the work. Koeman wanted to make an installation that deals with the fysical concept of travelling.
His plans for the CEAC are a dosed mix of spacial thinking, the
use of architecture as a vehicle for an almost existential metaphor, the introduction of language and ‘lost and found’ objects of massmedia as a pacemaker for a poetic wandering. The ‘central’ text is a sentence as an announcement; ‘Someone who, during the course of a day, repeatedly stands still and looks around, as if, next to the normal procedure of his day, another procedure exists, that he is not aware of’.

The compact parcours of cargocarriers and textboards is almost shaped like a transitzone; a place to pass and wonder. Unlike most transitzones
it bears no practical information but visual poetry and esthetics thereby inviting the viewer to link, think and compose his or her own voyage.

The boxes in the installation are differently sized copies of cargo-carriers as they are used on airports and airplanes to transport luggage and freightage. Objects that are rarely seen by people who don’t work at airports, like most of us. Actually they are somewhat of a mystery, despite their blunt and practical shape; four of them placed next and on top of eachother form a ‘circle’ to fit in the stomach of an airplane.
The cargocarriers serve as ‘transporters’ for all kinds of pictures and
texts that represent the ‘museum’ and therefore a bit of the identity of the artist. Also take a look in the carriers and enjoy the various images that are offered. The artist sees these carriers as architecture, as a ‘Wohnmaschine’ (a term from the Bauhaus movement), a transportable habitat. He imagines it to be a temporary house in which you could fly allover the world. By giving them different colors and materials the boxes gain an identity but they still keep the concept of a proposal, a possibility. This proposal makes it a ‘Mental Architecture’. They can be seen as metaphores for our desire to travel the world, as transporters of thoughts.