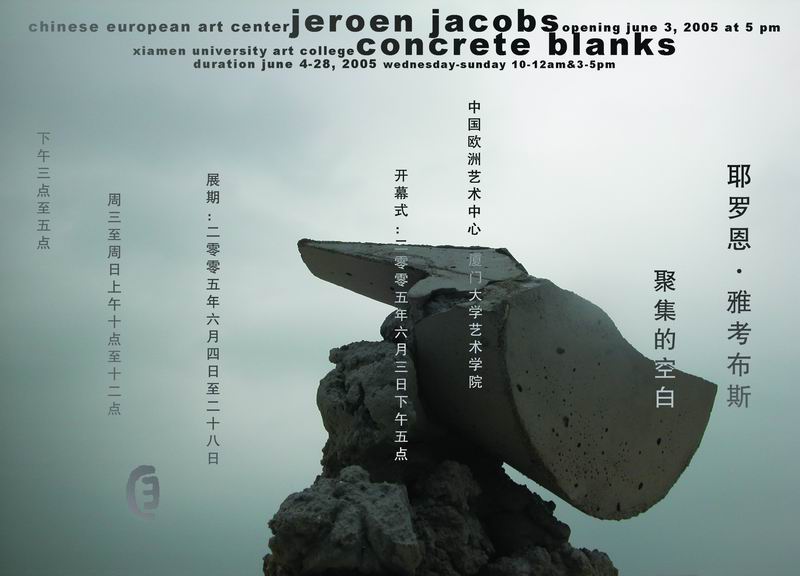 Given the fact that space is infinite and everything contained within it represents a disruption of this infinity, then the surfaces of things represent the boundaries of the space. Imagine that you are floating weightlessly in space around those objects, and getting closer and closer to them. The space between any of these objects becomes narrower and tighter. At some point this gap becomes so constricted that it is perceived as a particular space and no longer as part of the endless vastness. The look and quality of objects around loose their significance as our vantage point shifts to the newly created space. Within this space the surfaces of things become more significant. They become the structural framework of this newly created emptiness, the described blank.

This described blank is the starting point for Jeroen Jacobs unique observations. In his studio in Xiamen the artist experimented with the creation of these blanks, repeating the process over and over while varying form and shape. In the casting process form and contra form are transcended and eventually go beyond this aspect. You might recognise the shapes of everyday objects such as bottles, an eraser or ruler, that have been put into the small grey sculptures. Certain surfaces resemble fragments of the familiar. Yet they remain as strange sculptures in whose material l the process of their creation is revealed. Concrete was cast into carefully constructed molds of lath and tape. Concrete as allowed to leak out of the molds, allowing gravity to determine the form.

The precise analysis of space and material is only considered to a certain degree, where the process has been allowed to take over. Thus the spontaneous, hardly manageable casting process plays a crucial role. The purposeful construction of a complicated mold is superseded by the subsequent casting which appears to have been roughly executed.

The resulting sculptures, with their pure and smoothed surfaces, appear massive and bulky. They maintain a precarious balance and tenuous equilibrium lending them a certain charm. Here, ordinary materials of sand, cement and water, a mixture unattractive in color, take on illusive meanings and evolving figures. Perhaps they are characters escaped from a fairy tale about funny hybrids.